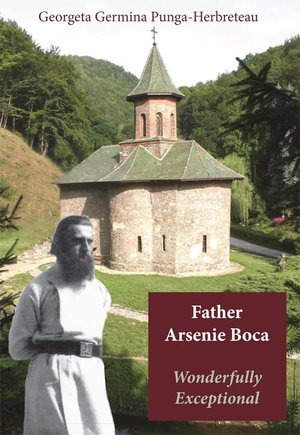 In recent years, Germina Georgeta Herbreteau-Punga has worked on the publication, in Dutch, of the texts written by Father Arsenie Boca. This book previously was published as “Cărarea Împărăției” (1995, Romanian) and “The Path to the Kingdom” (2013, English). “Het Pad Naar Het Koninkrijk” was published in 2018 and had a sequel in “Wonderlijk Uitzonderlijk” (2019). This latter book was translated in English and is now presented as “Wonderfully Exceptional”. Indeed, this book is not only an enriching sequel, but an inspiring introduction to “The Path to the Kingdom” as well.

After all, “Wonderfully Exceptional” collates testimonials from people who met Father Arsenie during his earthly life or only got to know him after his death. This collection, which highlights Father Arsenie’s life and personality in various ways, is complemented by an autobiographical note by Father Arsenie himself and a concise biography, richly illustrated with striking photos and an extremely handy overview map.

Germina Georgeta Herbreteau-Punga made a beautiful and varied selection from the extensive range of stories and interviews that appeared in the Romanian media since the death of Father Arsenie in November 1989. A number of witnesses belong to her personal circle of friends who introduced her to this beloved Romanian monk. She also writes about this meeting, which changed her life positively. Below is a small impression as a foretaste.

“… After my testimony, I went up the hill where Father Arsenie is buried. The grave is located at the end of the cemetery of the nuns. I knelt before the cross and embraced it with both hands. Then, I saw that I was not wearing my rings. ‘Where are my rings?’ As soon as this thought dawned upon me, there was an inner voice that calmed this moment of unrest: ‘Why are you worried about your rings? Cherish this instant with love and attention, because you are here at the grave of Father Arsenie. Do you really want to feel his intimate and inner presence?’ I became calm and a conscious and personal prayer rose from my heart. Heavenwards…”

No physical stock available for this book!